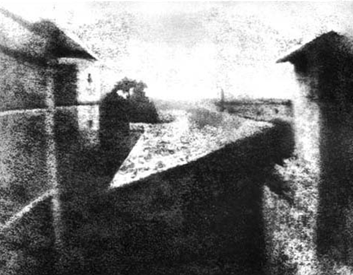 Etched the plate, buffed with ink and then printed on a press.
Exposure took more than 8 hours.

The first experimental application of light-sensitive materials to the production of printing surfaces was made by Joseph Nicéphore Niepce, of France, an early researcher in lithography who began his experiments in about 1813.

He is credited with having produced the first permanent photograph. In 1826 Niepce coated a pewter or copper plate with a photosensitive asphaltum and exposed the surface to bright sunlight through an etching of a portrait, which served as a positive image.

Sunlight passing through the background of the etching hardened the asphaltum, while the protected areas, under the inked portion of the etching, were developed in oil of lavender and white petroleum to create an image in exposed metal. This image was then etched into the plate, and from the intaglio image, prints were made on a copperplate press.