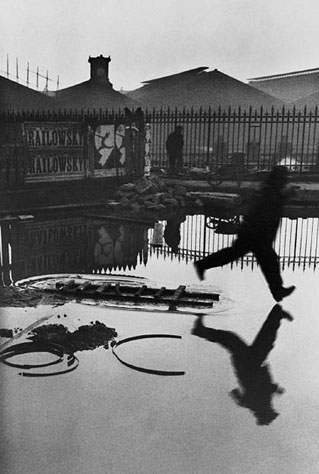 Called “equivocal, ambivalent, and accidental” when first exhibited at the Julien Levy Gallery in New York in 1933. Henri Cartier-Bresson began to photograph around 1930 revealing an ability to create images that invest moments in time with enduring mystery or humor. “Decisive Moment.”

Throughout a career of some 35 years, he consistently upheld primacy of individuality and spontaneity in photographic process, maintaining that “you have to be yourself and you have to forget yourself” in order to discover the exact instant and position from which to extract a moment of meaning from ongoing existence.

Commissions from Harper’s Bazaar and Vu in 1932 started Cartier-Bresson in photojournalism.

Convinced of constraints of preconception, and approached actuality with an intuitive sense for forms ripe with emblematic significance and an eye for precise visual organization. 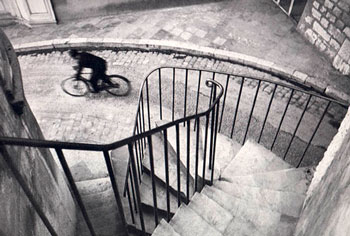 Photographed Mexico and the US in the 1930s seeking not only momentary action framed in the viewfinder of the camera but some essential truth about the larger society of which it was a part.

Studied film technique, working with Strand in US and Jean Renoir in France. In 1945, escaped from 36 months of captivity as a German prisoner-of-war.