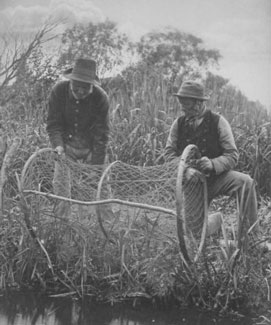 Tendency of lowering of standards with the invention and marketing of new equipment and processes designed to make a photographer out of just about everyone.

Naturalism (substitute for Impressionism) protested these developments. Peter Henry Emerson held that camera images ought to reflect nature with “truth of sentiment, illusion of truth… and decoration,”.

By following his path, photographs would achieve an aesthetic status independent of and equal to graphic arts, without handwork. Role of the photographer was to be sensitive to external impressions. Emphasized importance of selection and feeling akin to 19th century aesthetic artists.

Described realism as “false to nature” because it was descriptive, while Naturalism was both “analytical and true.”

Probed beyond the surface to expose in both word and image the difficult existence of the English rural poor while also documenting their fast-disappearing customs and traditions. 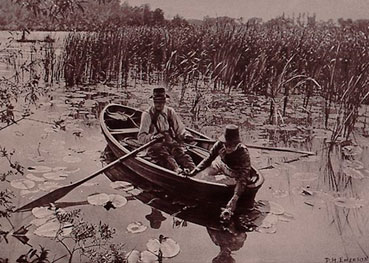 Documented aspects of rural life in England with the stated aim of “producing truthful pictures.” Crowned with degrees in medicine and surgery.

Embarked on a journey to document East Anglia, inhabited by poor farm laborers, fishermen, hunters, and basket-makers. Published images in book form- sequential statements rather than individual works of art.

Scientific background led him to examine human vision. Argued that a momentary glance of human vision is only sharp at the point of focus. Emerson sought to make a statement about the incivility of modern industrial life.

Emerson renounced his great expectations of photography in 1890 after being convinced that photographers could not truly control the tonal quality of the print, and therefore the medium was at best a secondary art.

Naturalism refined and reinterpreted photography and provided a foundation for photographic art movements throughout Europe and US. 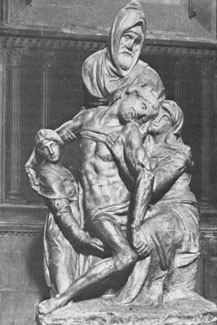 Professional photographers throughout Europe started in the 1850s to publish photographic prints of the masterworks of Western Art. Camera has been the most significant purveyor of visual artifacts, revolutionizing public access to the visual art heritage of the world.

Instructions for photographing works of art appeared in the 1850s to convey both form and drama. Fenton worked for the British Museum, providing them with negatives and selling prints to the public.

Large enterprises such as the Alinari brothers of Florence were organized for the publication and sale of art reproductions. Braun photographed Holbein drawings including Dead Christ. Changed from albumen to carbon printing in order to produce permanent images.

Large-scale activity increased accuracy of representation and made low cost reproduction of artworks available to individuals and art schools. Had a profound effect on the discipline of art history. Allowed for establishment of chronology and trace developments. Awakened interest in artifacts and ceremonial objects from ancient cultures and tribal societies.