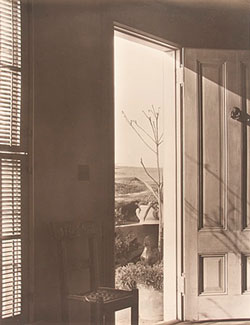 Edward Weston handled the industrial theme with sharp definition and singular sensitivity to the dramatic character of stacks and conveyors.

Weston described the object-oriented images as revealing “the very substance and quintessence of the thing itself.” At times, such intense concentration on form virtually transmuted the object into an abstraction. 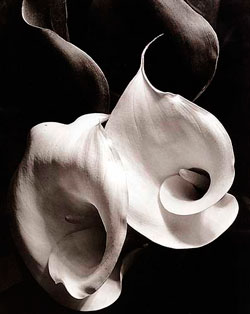 Imogen Cunningham met Weston and replaced her interest in close-ups of plant forms and other organisms. Her clean, stark views of industrial structures can be considered, along with Weston’s, paradigms of the Precisionist style.

A deep respect for the grandeur of the landscape of the American West combined with active promotion of the straight photograph brought world attention to Ansel Adams.

Ansel’s approach included large-scale nature in all its pristine purity. Similar emphasis on form and texture to that of other Precisionist photographers. Work embodies a scientific control of exposure, developing, and printing.

In 1930, the “f/64” group was established in San Francisco and promoted Precisionism through advocacy of the large-format camera and small lens aperture. Printed by contact rather than enlarging.

The Great Depression altered general perceptions about the wonders of industrialism.

Developed into the quintessential American artist/photographer of his time. Born in Illinois in 1886, he opened a portrait studio in California in 1911.

Broke with Pictorialism and embarked on the life of a creative photographer. Controlled form through choice of motif, exposure time, and pre-visualization.

Had temporal and transient effects of light, atmosphere and movement in order to concentrate on revealing the object in its “deepest moment of perception.” 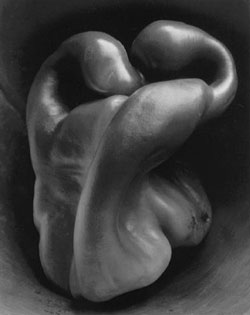 In 1927, began to photograph single objects –both organic forms and artifacts, removed from their ordinary contexts.

Photographed shells, green peppers, and household implements. Shapes seemed intrinsically beautiful and revealed “an essence of what lies before the lens.”

Nude was especially significant for search for formal perfection.

Intense feeling for the California landscape and achieved the riches and most personally nuanced imagery of his career.