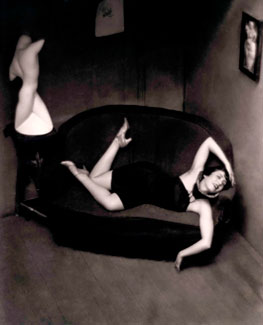 André Kertész photographed lines and shapes from above. Moved to Paris from Hungary in 1925. Embraced the new vision as a means to extract lyrical moments from the ordinariness of daily existence.

The view from above made possible the ambiguous reading of shadow and substance. Vilho Setala, a skillful Finnish photographer has visual interplay of figures and shadows to suggest a typically urban experience of anonymity and mechanized existence.

The New Vision and the Close-up 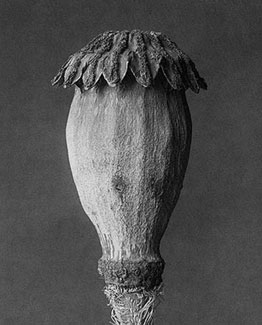 The lens acts like an enlarging device to call attention to patterns, textures and structures that might pass unnoticed. Reflected the advances in scientific photography during the 20th century.

Regarded as one means for “the objective presentation of fact,” which frees the viewer from the confusion of individual representation.

Concentration on discrete objects signified that the camera was more suitable for revealing specific appearances than for depicting complex psychological or social relationships.

The Close-up recommended itself strongly to German partisans of the New Objectivity; Karl Blossfeldt sought images of plant forms to establish a link between form in a natural world “governed by some fixed and eternal force.”

The New Objectivity’s most renowned advocate, Albert Renger-Patzsch; a photographer in Germany, also sought to reveal analogies between natural formations and factory-produced object, in order to suggest the formal structures that are basic to plants, bridges, factories and their products. 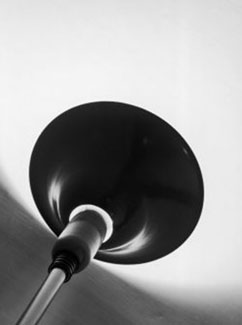 The close-up garnered international adherents. Blossfeldt’s Art Forms in Nature, and Renger-Patzsch The World Is Beautiful (a model book of objects and things).

Shaped the work of many Europeans including French photographer Piet Zwart-robust image of a cabbage can be compared with a similar image by Czech photographer Ladislav Berka.

The New Vision and the USA 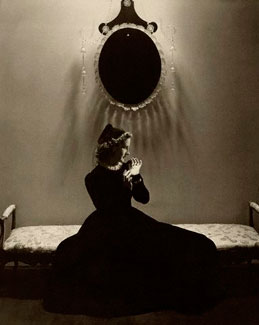 Attracted all significant photographers in the US in the 1920s, many of whom accepted the idea that “absolute objectivity” constituted the unique property of the camera image.”

American photographers emphasized the material properties of the real world even as they sought to embrace modern aesthetic ideas, an attitude shared with Precisionist painters of the period.

Neither Steichen or Stieglitz adhered strictly to the vocabulary of the New Objectivity, both incorporated elements of the style with brilliant results.

Steichen preferred sharper definition and interest in compositional theory in the postwar years. Experienced as an aerial photographer during the first World War.

Stieglitz believed in primacy of subjective feeling as it underlay's the stylistic devices chosen to incorporate into his imagery. Strand, Schamberg and Sheeler emerged as the flag-bearers of the new approach.

Schamberg was the first American to incorporate abstract machine forms in painting, used the camera for portraiture and to create complex Cubist-like juxtapositions of geometric shapes in urban landscapes. 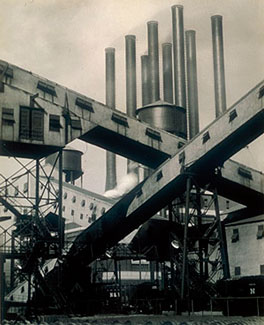 Sheeler began to photograph in 1912 to sustain his painting activity with commercial architectural photography, sought out the simple geometric relationships. Landed a commission in 1927 to photograph the nation’s largest automotive plant-the Ford Motor Works at River Rouge.

Growing ambivalence between painting and photography caused him to regard the camera as a tool for making studies. Clarence White School of Photography proved to be a fountainhead of modernist ideas despite the Pictorialist outlook of its director.

Successful transformation of the vocabulary of the new vision into a style of both personal expressiveness and commercial utility is visible in a number of students including Ralph Steiner, Outerbridge, Gilpin, Bruehl, and Bourke-White.

Laura Gilpin opened a commercial portrait studio after a brief period with the White School. Handling of local architectural and landscape themes during the 1920s reveals an interest in abstract geometrical pattern. Berenice Abbot and Walker Evans were in Europe during the cultural ferment of the 1920s. 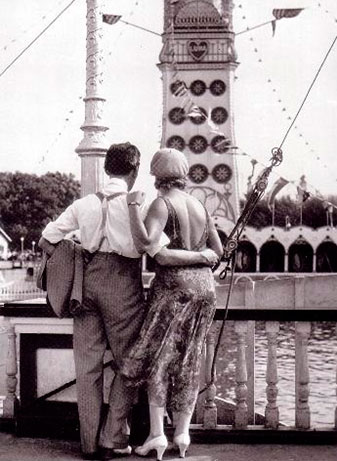 Many artists began to grapple with problems of pure form, inner visions and with representing new perceptions of social realities. One significant group concentrated on “private realities” drawing inspiration from Abstract Expressionism, psychoanalytic though, Zen and other systems of Eastern philosophy.

Others inspired by refugees who organized the American Bauhaus, and tendency to obscure traditional line between photography and graphic expression. Explosion of photographic activity in the US stemmed in part from scholarships given to former members of the armed forces. Enabled them to attend art schools and colleges at governments expense.

Introduced to many as a way to make a living as a means of personal expression. One such educational institution was Institute of Design in Chicago-the American incarnation of the Bauhaus. Advocated the “new vision” dedicated to finding fresh, personal ways of looking at commonplace. 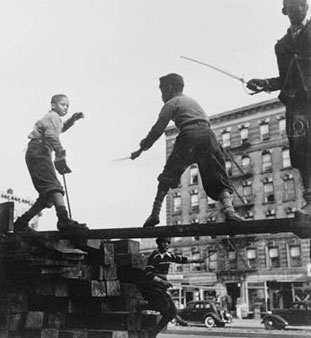 Harry Callahan and Aaron Siskind attended Institute of Design in Chicago. Callahan used 35mm and 8x10” formats, worked in black and white and in color, and made multiple exposures, montages and collages.

His straight images exemplify attempts to find a visual means of “revealing the subject in a new way to intensify it.”

Siskind attracted to abstract forms in nature and in the built world. Sought to see “the world clean, fresh, and alive.” Siskind acknowledged the influence of accidental and spontaneous gestures favored by Abstract Expressionist painters. Much of the experimentalism fostered by the institute took the form of manipulative interventions.

Several graduate of the institute including Geoffrey Winningham, Art Sinsabaugh, and Linda Connor applied precepts to straight photography but embraced unusual formats or special lenses to express a fresh vision of reality.

Another dimension was given to postwar photography by Minor White. Searched for allusive or metaphorical meanings in the appearance of reality. White persuasively urged photographs be made to embody a mystic essence, that the camera reveal “things for what they are” and “for what else they are.”

Unsympathetic to the idea that the medium should emulate painting and drawing. Sought to continue directions in straight photography mapped out by Stieglitz and Weston.

White obliterated clues to size and geographic locale, giving his images an enigmatic quality.
Young photographers looked to natural phenomena of all kinds that might express their feelings of being at one with nature. 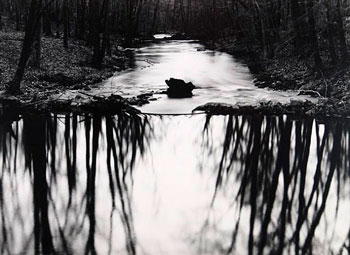 Eroded surfaces, tangled branches, translucent petals, watery environments and rock structures photographed close-up and with large-format cameras were favored by Walter Chapell and Paul Caponigro.
Used as a means to going beyond perception to evoke the mystic divinity in all nature.

The power of light to unlock “the greatest secrets of the unknown” is central to the imagery of Wynn Bullock.

A similar attitude about the transcendent meaning of nature has inspired Linda Connor’s images of sacred trees, rocks, and waterfalls around the world. William Garnett viewed the landscape with fresh regard from an unusual angle. 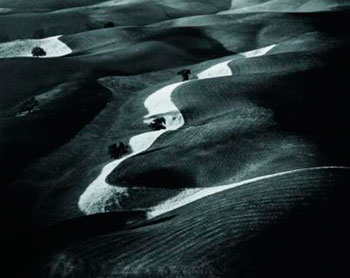 Both William Garnett and Bradford Washington photographed from the air and transformed the shifting patterns of the desert, eroded soil, and farmland into elegantly structured abstractions through framing and quality and direction of light.

During the 1960s, the concept of the camera image as a lofty emblem of some universal truth was challenged by several groups.

By those who believed that “the interior truth ultimately is the only truth.”
By those grappling with aesthetic or conceptual issues.
By those who responded to social realities in a subjective fashion. 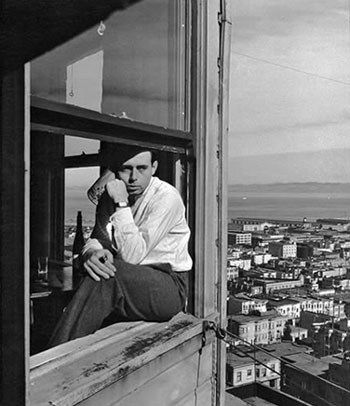 The first two groups turned to manipulative and directional photography, while chroniclers of the social scene continued to favor straight photography. The popularity of the 35mm camera and fresh ideas about photographic aesthetics yielded a distinctive new style in straight street photography with the prevailing tone becoming distanced and ironic.

First emerged in street images of early 1940s from Callahan, Walker Evans, and Louis Faurer. Europeans working in the US from the 1930s included John Gutmann, who focused on the urban scene in travels across the country. Used photography to record the signs and symbols of American popular culture. 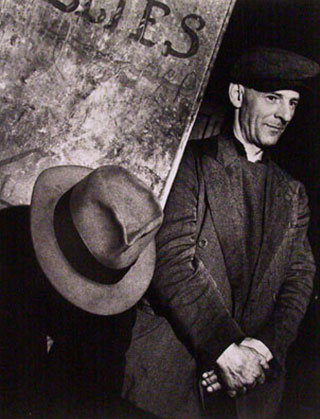 Lisette Model was born in Vienna, worked in France, and then settled in the US in 1938. Model was an influential teacher and made sardonic images in the streets of New York. Found a receptive audience in Diane Arbus and Robert Frank. Robert Frank was born in Switzerland and awarded a Guggenheim grant in 1955 and took a photographic odyssey through the US with a 35mm Leica.

Was an outsider that regarded cherished national institutions and pastimes with detached skepticism.
Sensitive eye transformed situations into metaphors for the facetiousness and consumerism of American postwar society.